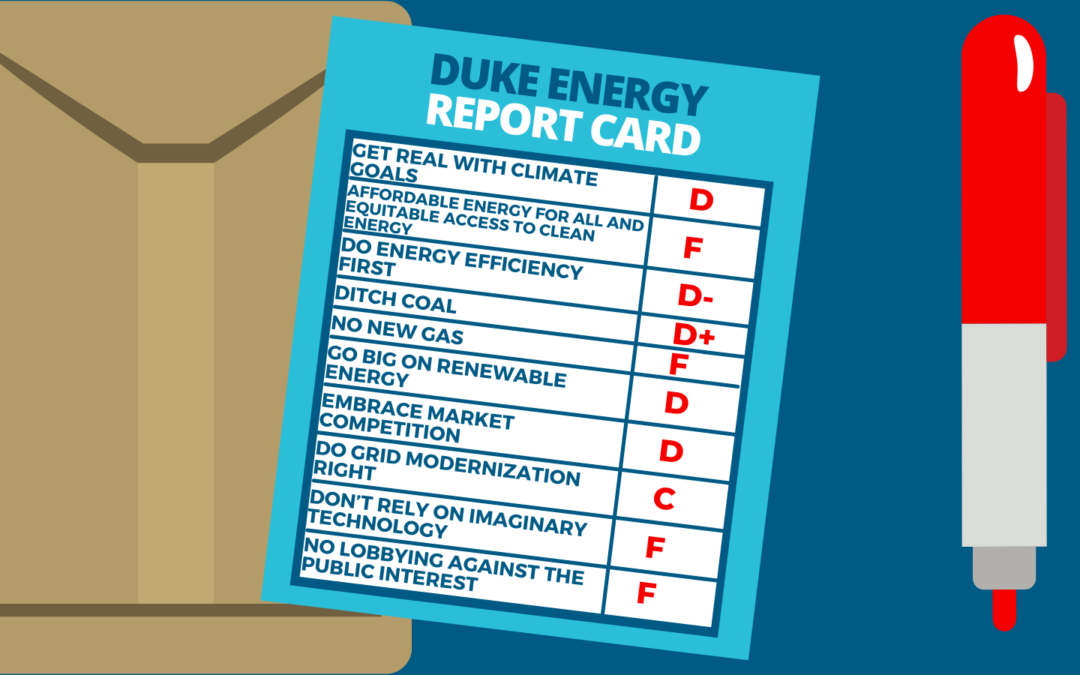 The IRPs are the first filed in the Carolinas since Duke Energy’s September 2019 commitment to reach net zero carbon emissions by 2050, and since legislation in South Carolina and executive action in North Carolina indicated interest in climate action. However, the report card found that Duke’s plans neither adequately address climate change nor reduce customers’ energy burdens.

Instead of choosing the cleanest and most cost-effective option of retiring coal plants immediately and replacing them with efficiency and renewables, Duke’s plans delay coal plant closures, and propose to build 9.6GW of new fossil gas. The plans also continue to fund lobbying efforts contrary to the public interest and to rely on technologies that have yet to be developed, when cost-effective and climate-friendly solutions already exist.

The proposed IRPs are currently under consideration before the North Carolina Utilities Commission and South Carolina Public Service Commission.

See the Report Card at DukesEnergyPlan.org.

“It’s time to stop pretending Duke Energy is working to slow the climate crisis that’s devastating many North Carolinians. Duke Energy is working only to increase its profits, as this IRP amply demonstrates,” said Jim Warren, Executive Director, NC WARN. “Other utilities are turning toward — and profiting from — clean energy, while Duke is still making excuses for its huge fracked gas expansion. North Carolinians are demanding a transition to cheaper, clean energy, and we want the Utilities Commission to speed it forward.”

“Duke’s climate talk can’t be taken seriously when they lead the country in energy generated from coal and gas,” said Will Harlan, senior campaign representative for Sierra Club’s Beyond Coal Campaign in the Carolinas. “Duke also has the most coal burning plants running through 2030 without a retirement commitment and the most fracked gas plants planned. Until Duke commits to retiring its coal fleet and pivoting to renewables, communities will continue to suffer, especially Black and low-income communities hit hardest by Duke’s pollution.”

“What part of Climate Emergency does Duke Energy not understand?” asked Cathy Buckley, Director of Statewide Organizing for the NC Alliance to Protect Our People and the Places We Live (APPPL). “This energy monopoly is hell bent on digging us even deeper into a filthy, expensive, fossil-fueled catastrophic future — at a time when energy efficiency and conservation, solar, and wind solutions to the climate crisis are at hand. Those living closest to the utilities’ coal and fossil-gas plants suffer not only dire health consequences but also regressive energy pricing that places an outsized burden on their shoulders.”

“This report card identifies key areas for NC’s energy+climate future,” said Jerome Wagner, lead organizer for 350 Charlotte. “Regrettably, our assessment is that Duke is flunking. Even more concerning – we don’t have time for ‘summer school’ or to redo the ‘school year.’ Duke needs to maximize renewables’ buildout by 2030, forget about fracked gas expansions, terminate coal use, and retarget to true-zero carbon emissions by 2040. Committed action to achieve that would earn them a passing grade.”

“Over the past several months Duke Energy has turned a blind eye to the struggles facing North Carolina’s families and workers, placing revenues and profits over public health and people’s lives as they’ve shut off power to more than 28,000 households,” said Rory McIlmoil, Senior Energy Analyst for Appalachian Voices. “And it is clear from the paltry investments in energy efficiency and low-income programming included in their IRP that improving affordability and alleviating household energy burdens is not going to be a priority for the utility in the future either.”

“Both the state and nation are at an economic, health, and environmental crossroads and Duke Energy and North Carolina have an opportunity to lead the way to a clean energy future,” said Joel Porter, Policy Manager with Clean Air Carolina. “Rather than outline how it can forge a way ahead to eliminate pollution and maximize clean energy production, Duke Energy’s IRP demonstrates a lackluster attempt to meet climate goals while continuing their reliance on antiquated fuel sources.”

“There are lots of problems with Duke’s energy plans, but one that might surprise people is that instead of going big on renewable energy now, they’re waiting for imaginary technology and future policies to save the day. Carolina families know that low cost clean energy solutions exist today–tens of thousands already power their homes and businesses with rooftop solar–but Duke’s clean energy plans are contingent upon new technology that hasn’t been proven yet and policies that aren’t in place,” said Odette Mucha, Regulatory Director at Vote Solar. “We can’t wait for a unicorn to magically arrive to address climate change, and we don’t need to. Duke must embrace existing clean and affordable energy solutions now to power the Carolinas into the future.”

“It’s time for Duke Energy’s actions to match the company’s PR about leading on climate,” says Eliza Stokes, Organizer & Communications Manager at MountainTrue. “Right now Duke has a historic opportunity to fully embrace the renewable energy of the present and future rather than clinging to the coal and gas of another era.”